It was the call of God that prompted Dr. T. G. Koshy to establish Faith Theological Seminary in 1970. The seminary began with the name Faith Chapel and Bible Institute. It was Dr. Koshy’s deep desire to train young men and women for the ministry. This calling and desire was placed in his heart after several years of faithful ministry as an evangelist.

The initial aim of the seminary was to send out missionaries into the field after providing a one year intensive course of Bible training and practical work. Later, the need for further training became obvious and in 1973, the Diploma in Theology course was introduced for which the medium of instruction was Malayalam and English. In 1976 the institute started a four year B.Th. program in English and three year C.Th. program in Malayalam. Since 1983, the seminary began to present students for the Serampore B.Th. Degree Examination (external). In 1985 the seminary began to offer B.D. (external) programme.

When the College upgraded to the Postgraduate level, the Board of Directors and the Faculty felt the need for changing the name. In 1988, as per the decision of the joint council of the Board and the Faculty, the name was changed to “Faith Theological Seminary.” 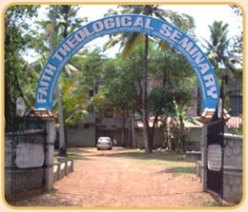 In 1989 the Seminary officially affiliated to the Serampore University at the B.Th. level. Since 1991 the Seminary has been offering the B.D.programme, as a joint effort with Kerala United Theological Seminary, Kannammoola, Thiruvananthapuram.

By realizing the present need and challenge, becoming aware of women’s role in God’s ministry seminary laid the foundation for FTCW (Faith Theological College for Women)  for training women for God’s ministry. The Seminary started a two year Certificate in Theology programme for women in Malayalam medium in 1992, and a 3 year programme in English (B.A. in Theology), in 1993. At present seminary offers B.D, and M.Th programmes to train and equip women academically and spiritually for the expansion of God’s Kingdom.

Faith Theological Seminary has grown academically, numerically, and spiritually as a well respected institution of higher learning for the ministry It continues to attract students from many states of India and neighboring countries. The graduates of this Seminary serve in various mission fields of India and abroad.

The seminary also has auxiliary ministries through various media such as Literature, Correspondence course, Extension Education etc. in view of reaching various language groups, training centers are active in various states throughout India.

With heartfelt thanksgiving we acknowledge God’s faithfulness in sustaining our seminary thus far. In spite of the difficult situations and financial constraints, God has been gracious to lead us to train young men and women for global mission. Moreover, the Lord has been kind in enabling us to fulfill the motto of the seminary ‘Perfecting to make perfect in Christ’. We are delighted that over 3500 graduates from this institution are serving Lord faithfully in various capacities all across India and beyond.